Marlena Graves is a writer and advocate for farmworkers' rights. For over ten years she worked for immigration reform, including two years for the Farm Labor Organizing Committee.

The L.A. Times, in an article published on April 1, reported on the plight of farmworkers in California. There are over 400,000 of these workers, many of them immigrants. They have been deemed essential workers, but they can't afford to stop working anyway. Oftentimes they work without adequate protection against the COVID-19 virus. Many, especially those who are undocumented, work without health insurance. What are your thoughts about this situation?


For over a decade, I have worked for immigration reform and in the last two years, I worked for migrant farmworkers when I worked for the Farm Labor Organizing Committee (FLOC). I no longer work there, but I’ve been out in the fields with these farmworkers, talked to them in person. They plant and harvest our fruits and vegetables. Many others work in the meat-packing industry or on dairy farms. Others work at vineyards. In other countries, farmworkers harvest our coffee beans, tea, cocoa, and so much more. I’ve talked to farmworkers from around the world in person too. We do not eat without them. I think it is morally wrong that the people who harvest our food can't make enough money to feed their own families and are exposed to the virus. Christians who dismiss their situation are not pro-life but are actively promoting the culture of death.


But don't take my word alone; James 5:4-6 says: Look! The wages you failed to pay the workers who mowed your fields are crying out against you. The cries of the harvesters have reached the ears of the Lord Almighty. You have lived on earth in luxury and self-indulgence. You have fattened yourselves in the day of slaughter. You have condemned and murdered the innocent one, who was not opposing you.


In the same L.A. Times article, it was noted that the United Farmworkers Union has advocated for employers to protect agricultural workers. Some are responding, but advocates worry that such protections won't filter down to each farmworker. Especially among large growers. Do you have any thoughts regarding possible solutions to this dilemma?


If the large farm growers let unions like the United Farm Workers and the Farm Labor Organizing Committee and others organize the workers, each worker would get what they need. The union organizers would make sure the farmworkers organize themselves and the farmworkers themselves, with the support of others, will make sure they all get and distribute these protections. They look out for one another. They are smart people. All they need is access, support, and to be allowed to do what they need to do to protect themselves.


Another point made by the L.A. Times reporter was that the very nature of agriculture involves contract and subcontracting work, which gets in the way of effective communication. Also, some workers only speak their
indigenous language. Again, any thoughts on this particular challenge?


It is true that many do speak indigenous languages and need translators. But they themselves will be motivated to spread the news once they have their own translators. The growers can make sure that they are communicating about the virus (unlike the one mentioned in the article). If the growers work with organizers on the ground, and the media, farmworkers will find out. Most of the farmworkers have phones. Could a special app be developed that communicates the information they need? It also may take organizers going from grower to grower to communicate and convening the growers in a large group and breaking it down from there. State governors can mandate such things, but it would go much faster if folks are organized on the ground and the public puts pressure on the farmers to communicate to the workers because we all care about them. Oppression of farm workers is a violation of their human rights. If we made it a civil rights issue because they are here harvesting our food, I think much more can be done. But then again, it’s one thing to have a law on the books and another to enforce it. America and Christians, in particular, are seldom, as a whole, at the forefront of acting righteously on behalf of the marginalized and the oppressed. Note that the words justice and righteousness are tied together as far as language goes. Meaning, if we are not acting justly, we are not acting righteously. I encourage readers to study up on it.


On April 9th the N.Y. Times ran an article highlighting the challenges of workers in meat processing plants. The jobs are mostly line-work, done in close proximity. The reporter noted that most of the individuals working these jobs are African-American, Latino and immigrants. While some processers are instituting safety measures to guard against the spread of COVID-19, union leaders say it's a case of too little, too late. In fact, one of the "hot spots" for COVID-19 cases in Georgia is a town near such a processing plant. Do you have any thoughts about this group of folks?


Since then, Smithfield Foods closed down its meatpacking plant in Sioux Falls, SD too. I agree with the union leaders, however, I think companies and growers can always start now by using the best recommendations by the WHO and our CDC if they are to run a business. We should care because they are human beings made in the image of God, our brothers and sisters. But unfortunately, I see that we often only start caring when it affects us personally and economically.  So, my thought is to do what it takes to get them the medical care they need, and to help their children and families. We cannot be like the Priest and the Levite who pass by on the other side in the Parable of the Good Samaritan.


Do you have any further thoughts or considerations regarding America's agricultural workers, especially those involved in fieldwork (harvesting)?

Can I fill an encyclopedia? I am going refer those of us who claim to be Christians back to James 5:4. Look! The wages you failed to pay the workers who mowed your fields are crying out against you. The cries of the harvesters have reached the ears of the Lord Almighty. How we treat farm workers is also related to immigration and asylum seekers. It is the civil rights issue of our time. We can see that we will be judged by God if we continue to oppress them. Every single time we eat and drink we have to think about their situation and give them thanks and then work hard to see they receive justice. We can start by talking to them and asking them what they believe justice looks like. What do they need and want? A fair day’s pay for a fair day’s work to start—so they can feed their families as my former boss Baldemar Velasquez has said. They also have the right to medical care, time off, food, breaks, and a whole host of other human rights. Again, ask them. They have opinions, are brilliant, and can come up with creative solutions.

You can follow Marlena Graves on Twitter, she has written two books, A BEAUTIFUL DISASTER; and THE WAY UP IS DOWN, which is scheduled for release on July 14.
- April 15, 2020

Beyond Welcome by Karen Gonzalez, A Review

“Centering immigrants in our Christian response to immigration means that we make room for their integration but do not pressure them to ass... 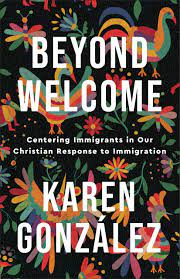 I'm a published author (20 Short Ones: 20 Tales of Hope and Metropolis: Tales from a Small Town). This blog has a focus on social justice and faith. You can find more about me at: dansalerno.com